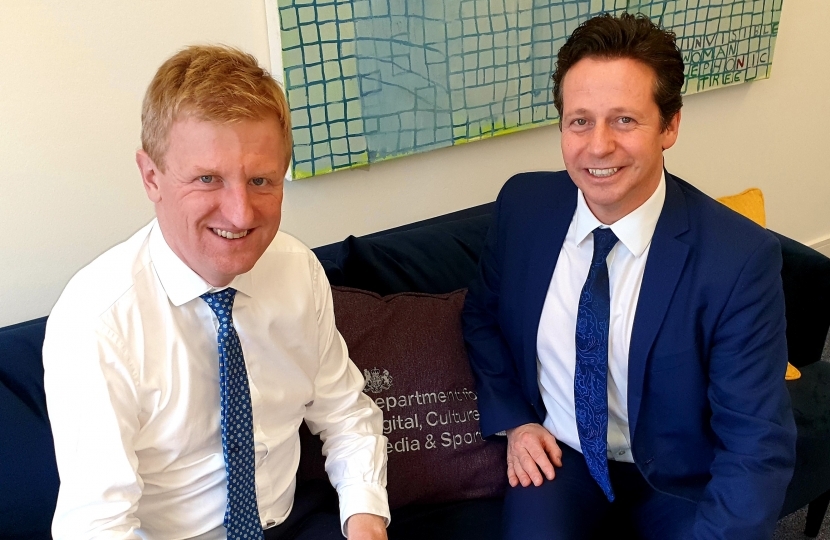 Speaking following his appointment as a Minister in the Department for Digital, Culture, Media and Sport, Nigel Huddleston, MP for Mid Worcestershire, said:

"I am delighted to have been appointed a Minister in the Department for Digital, Culture, Media and Sport (DCMS) in the recent government reshuffle.  My official title will be Parliamentary Under Secretary of State.

"DCMS oversees sectors of the economy such as tourism, technology, the creative industries, media, heritage and sport - which together sustain millions of jobs in the UK and it oversees activities and pursuits that truly enhance peoples lives.

"Some of you may know I've been involved in DCMS related matters since I was first elected in 2015 and also in my work before entering parliament, so I have had a long term interest in this vital government department.

"From 2015 to 2017 I sat on the DCMS Select Committee which is a cross-party committee of MPs whose job it is to hold the Department to account and conduct hearings into important and urgent matters of interest. While on the committee we investigated issues such as the renewal of the BBC’s Charter, sports sponsorship, disability access to stadia, media regulation, football governance, secondary ticketing sites, museums and tourism, drug taking in sport, homophobia in sport and #broadband rollout.

"Following the 2017 General Election I left the committee when I was appointed to the position of Parliamentary Private Secretary to two DCMS Secretaries of State (first, Matt Hancock and then Jeremy Wright) - and most recently, I held the position of the Government Whip for DCMS.

"Prior to becoming an MP I worked for Google as the Industry Head for Travel and before that I worked as a Consultant at Deloitte in the UK and the US covering the travel & tourism, and tech, media & telecommunications sectors. My work over more than 15 years based mainly in London and Los Angeles involved everything from developing business plans for hotels and theme parks, to valuing sports rights for TV distribution.

"I’m very pleased that the Prime Minister has offered me this opportunity and I look forward to getting down to work alongside the new Secretary of State, Oliver Dowden (pictured) and the entire DCMS team."

I am 44 years old, married to Melissa and we have two young children (Tyler, who is 10 and Mackenzie who is 7).  We live in Badsey, near Evesham, Worcestershire.  My children attend a local state school and until I became a Member of Parliament in May 2015 I worked at Google as the Industry Head of Travel.  Background:

The Prime Minister today urged MPs in the House of Commons to pass new COVID regulations, to keep transmission down and beat the virus