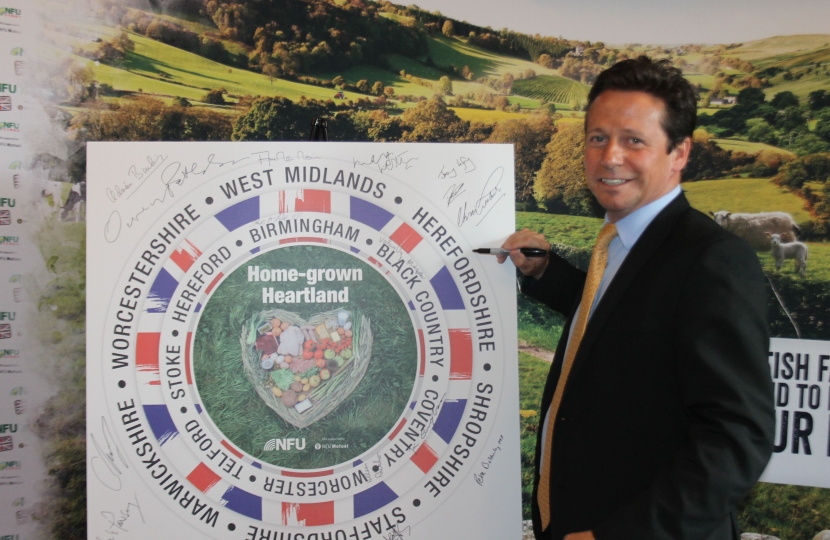 Mid Worcestershire MP Nigel Huddleston met with local farmers at the Houses of Parliament and backed a campaign to highlight the farming, food and drink industry’s contribution to the local economy and environment.

Farming in the West Midlands helps contribute around £800 million to the economy and as well as providing safe and affordable food, farmers also have a vital role managing the countryside.

Mr Huddleston was at the NFU West Midlands’ reception in Parliament, which aimed to raise the profile of the food and drink sector in the region - from those farming the raw ingredients to the product on the shelves.

Following the event, Mr Huddleston said: “There are so many reasons to support British farmers, and Worcestershire farmers especially: they are responsible for securing our fantastic British food supply, looking after our world-renowned countryside and sustaining a dynamic rural economy. That is why I am proud to support the Home-grown Heartland campaign and to champion Worcestershire growers.”

Mr Huddleston’s attendance at the NFU’s event in Parliament continues his recent efforts to raise the profile of local Worcestershire farmers in Westminster, and highlight the important contribution they make to the economy. Last month, Mr Huddleston asked the Environment Secretary, Michael Gove to lend his support to local world-class producers and growers such as those in the Vale of Evesham.