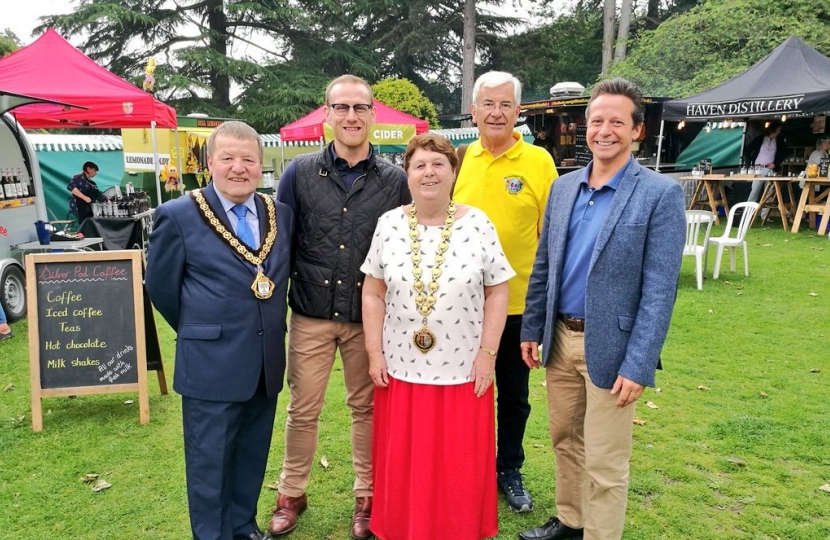 Mid Worcestershire MP Nigel Huddleston has asked for a debate in Parliament to celebrate and show thanks to the individuals who help put on community festivals right across the country, including Droitwich Spa’s very own Patrick Davis who started the annual Droitwich Spa Food and Drink Festival.

Mr Huddleston told MPs that he will have the honour of opening the Droitwich Spa Food and Drink Festival on 22 June and praised its outgoing organiser who will be stepping down from the role this year.

He then asked the Leader of the House of Commons, Mel Stride, whether MPs could have a debate to praise organisers and all of those involved in putting together community festivals, and to “celebrate our food and drink, our heritage and our culture, and to show our thanks to the many people who do so much to make them happen.”

Mr Stride told Mr Huddleston that: “if I am in that area at the appropriate time, I would very much enjoy attending myself.” This follows Mr Huddleston’s praise in the House of Commons last month for the British Asparagus Festival, where he asked the Environment Secretary, Michael Gove, to lend his support to local farmers and attend one of the events which were running throughout the Vale of Evesham.

Whilst unable to visit, Mr Gove did receive some Vale of Evesham asparagus from Mr Huddleston, which had not gone unnoticed during his exchange with Mr Stride, jesting to the Mid Worcestershire MP: “Somebody on the front bench curiously told me that the Gentleman’s favourite food is asparagus,” and that he was sure there would be some of the famous Vale of Evesham asparagus at the upcoming festival.

Mr Huddleston will be opening the Droitwich Spa Food and Drink Festival on 22 June, which runs over the weekend and is now in its seventh year. His attendance follows his recent support of the National Farmers Union ‘Home-grown Heartland’ campaign, which seeks to raise the profile of local farmers who generate £67 million each year for the economy.

The independent investigation into alleged discrimination in the Party has now concluded.