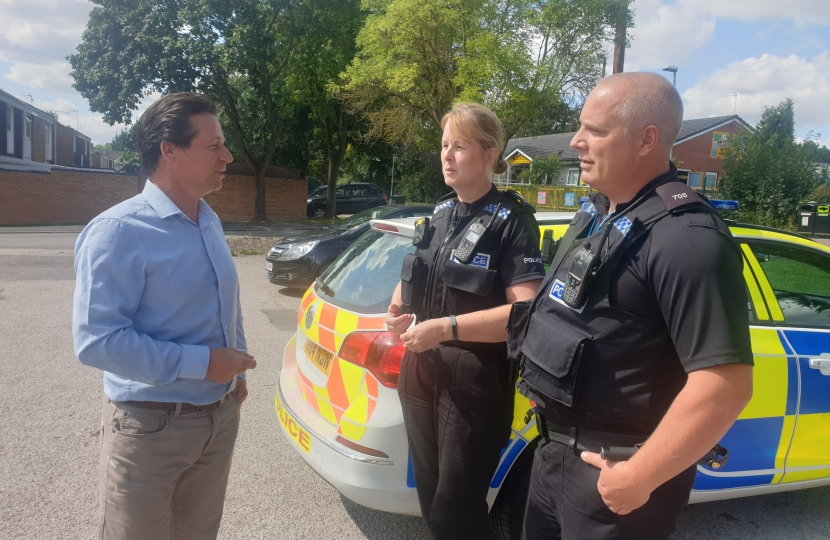 Mid Worcestershire MP Nigel Huddleston joined local police officers in Droitwich Spa to see first-hand the varied nature of police work and to hear about some of the challenges faced by frontline officers.

Mr Huddleston spent the afternoon with Safer Neighbourhood Team PS Sarah Kent and PC Richard Rees, where he went on patrol in Droitwich Spa and the surrounding area and learned more about their role and what they are doing to help keep residents safe.

Members of Parliament from across England and Wales have been invited by their local police forces to give a day to policing during the summer parliamentary recess.

Following the afternoon patrol, Mr Huddleston said: “I want to thank Sarah and Richard for taking the time to give me a brief glimpse of the kind of work they do to serve the community, and for everybody at West Mercia Police who works tirelessly to keep us safe.”

He added, “It was an informative and insightful afternoon and very timely given the recent announcement that 20,000 additional police officers are to be recruited over the next three years.

I hope a number of those new recruits will be joining West Mercia Police to support them in their work,  becoming part of our dedicated and highly professional Police force in Worcestershire.”

Today we have published our Covid-19 UK Vaccines Delivery Plan, setting out how we plan to deliver the biggest vaccination programme in British history, to protect all those who need it most as quickly as possible.