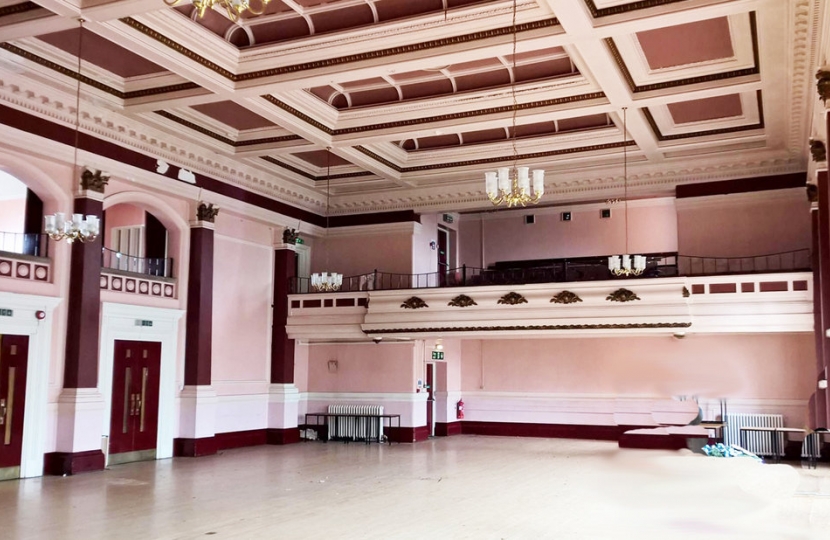 Evesham Public Hall could be transformed into a new arts and heritage centre under an exciting new £3.9million plan being considered by Wychavon District Council.

The proposal, from Chase Commercial Ltd, is still in the early stages of development, but Wychavon's Executive Board has given the green light to exploring the project in more detail.

The plan would see Wychavon fund the redevelopment of the Public Hall, as well as the ground floor and basement area.

The hall, and part of the ground floor, will be fully refurbished and remodelled as the new home for Evesham Arts Association, whose members are currently seeking to expand their role in the community.

As well as providing a home for an extensive arts programme, there would also be a café, rooms for hire and facilities for community activities including weddings and other functions, breathing new life into the heart of Evesham.

The remaining part of the ground floor and basement area will become the 'Story of Evesham' – a unique multi-sensory virtual reality visitor attraction based on the town's heritage. The focus would be on the history of Evesham Abbey, Simon de Montfort and the Battle of Evesham. The attraction would complement the town's existing heritage tourism offer.

A rent will be paid to Wychavon in return for the investment. Wychavon is continuing to work closely with Chase Commercial and both charitable organisations to finalise the plan.

Cllr Martin King, Executive Board member for Town Centres and Council Efficiency on Wychavon District Council and who represents Bengeworth Ward, said: "This is a very exciting proposal that will bring a much-loved community facility back into use in a sustainable way, generate footfall and support the wider transformation of the town centre.

"There is still a huge amount of detail that needs to be agreed but by giving initial approval we have taken an important step to making this ambitious scheme a reality."

Julian Meredith, Managing Director of Chase Commercial Ltd, said: "This is a fantastic opportunity to kick start the regeneration of Evesham which was, and remains our vision, when we became involved in the Riverside Shopping Centre.

"A huge amount of time and effort from all parties has been invested into creating this exciting and visionary concept. We are very excited at the prospect of not only creating a focal point that Evesham can be proud of but also creating a catalyst for the further regeneration of the Riverside Shopping Centre and Evesham as a town."

Chris Bloomfield, Chairman of Evesham Arts Association (EAA), added: "Our plans to create an adaptable performance space will open up the hall to a wide variety of live performance, whilst also making it a very attractive community facility suited to hosting a whole range of events.

"On numerous occasions I have heard it stated that the Public Hall should be run by the community for the community. As a long-established community organisation, the EAA are thrilled to have the opportunity to make this a reality."

Mick Hurst, Director of The Story of Evesham, said: "The Story of Evesham has many facets, that individually would attract visitors from all over the world, including The Battle of Evesham, one of the most important conflicts in political history, the remains of a massive abbey and of course a vision of the Virgin Mary. The town quite rightly should be on the Worcestershire, Stratford upon Avon – Cotswolds' visitor itinerary.

"Telling this story to a modern audience, who consume information digitally is now possible, by using cutting-edge film-quality CGI which will be presented in a multi-sensory Virtual Reality environment. Our aim over time is to increase tourism footfall, enhancing the retail and accommodation offer around Evesham and in-turn helping to regenerate the town centre."

The independent investigation into alleged discrimination in the Party has now concluded.