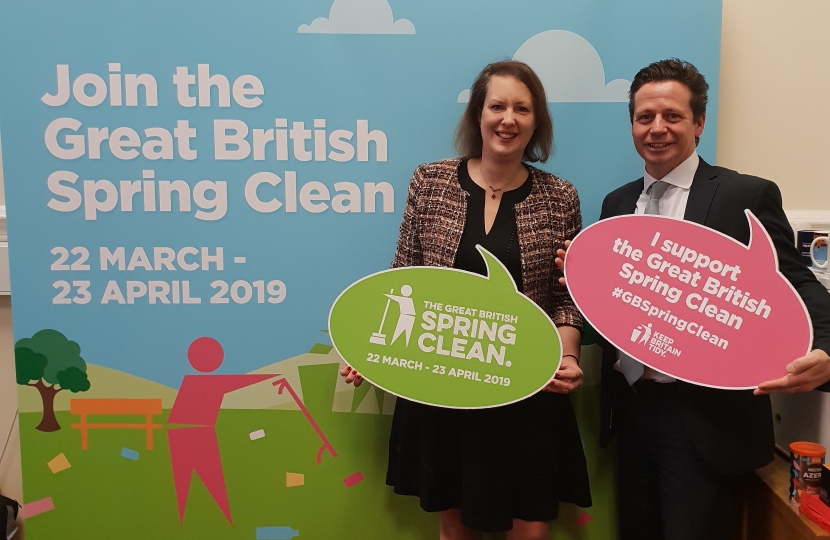 The campaign, which runs from March 22nd to April 23rd, will see up to half a million people taking action to clean up streets, parks and beaches across the country.

The Great British Spring Clean brings together individuals, community organisations, businesses and councils to make a difference to the environment on our doorstep and in 2018 around 370,000 #LitterHeroes collected more than 630,000 bags of rubbish.

Nigel Huddleston said: “I have been supporting the Great British Spring Clean since I became an MP in 2015 and am proud to be involved in this year’s campaign alongside Banbury MP Victoria Prentis (pictured) who co-ordinates the Spring Clean campaign amongst MPs. Not only does litter blight our countryside but it negatively impacts our wider environment, economy and wellbeing. I really hope people in Worcestershire get behind the campaign and I look forward to seeing lots of people out and about in the coming weeks to help clean up our communities. ”

Keep Britain Tidy Chief Executive Allison Ogden-Newton said: “The Great British Spring Clean is an opportunity for the millions of people who care about the environment on their doorstep to do something positive that will make a visible difference. Regardless of politics, everyone can agree that tackling the litter pollution that despoils our country is something we should all support and it is fantastic to have the support of Nigel Huddleston MP to help us reach our target of getting 500,000 people out, taking action to clean up every corner of the country.”