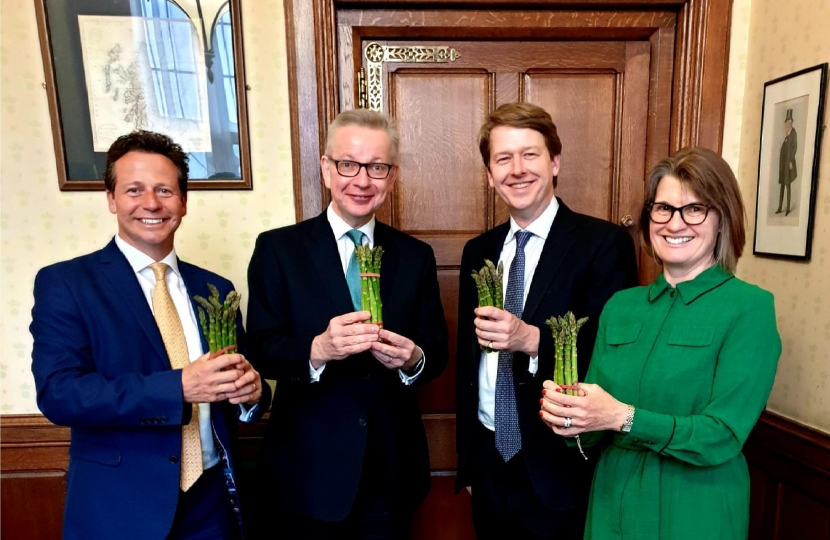 This week, Nigel Huddleston MP ensured the Secretary of State for Environment, Food and Rural Affairs, Michael Gove, kept to the promise he made last month and sample a selection of the world-class asparagus produced in the Vale of Evesham.

In the House of Commons Chamber last month, Mr Huddleston invited the Environment Secretary to the British Asparagus Festival currently taking place throughout the Vale of Evesham, and to show his support for local farmers who produce the celebrated asparagus grown in the area as well as other high quality food produce.

The Vale of Evesham is the only asparagus to have EU protected geographical indication (PGI) status.

Whilst Mr Gove was unable to attend the festival, he told Mr Huddleston that he would be very happy to try some asparagus as soon as possible.

Mr Huddleston was joined by fellow Worcestershire MPs Rachel Maclean and Robin Walker to present the locally-grown asparagus to the Environment Secretary, who was pleased to receive a sample from Revills Farm Shop based near Pershore.

Mr Huddleston said after the meeting: “I was delighted to be able to join some of my Worcestershire colleagues to present the Environment Secretary with asparagus that is grown in the heart of our region. The brilliant atmosphere of events like the asparagus fun-run that I took part in demonstrates how important farming and asparagus-growing is to both our community and the local economy, so I was pleased to bring a small part of that to Westminster and show Mr Gove why our area is the best for producing world-class food produce.”