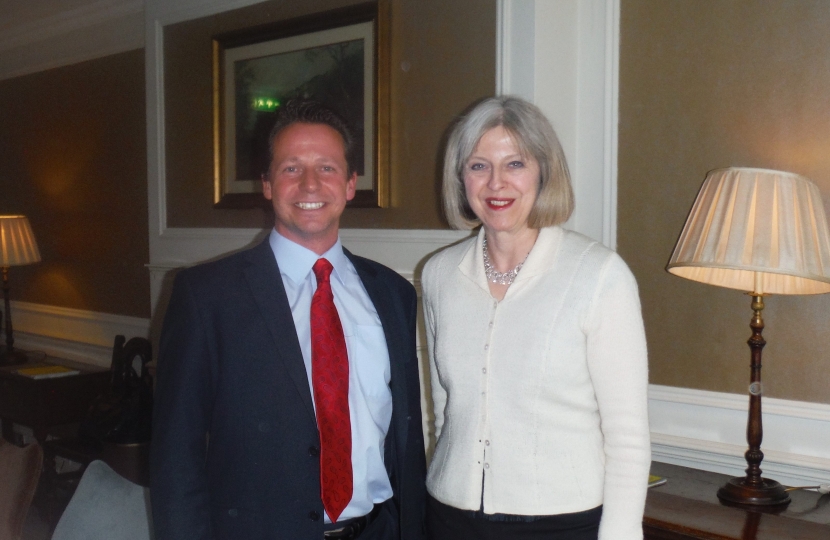 Nigel Huddleston, the Member of Parliament for Mid Worcestershire, has announced that he will be backing Theresa May in the race to become the new Conservative Party leader*.

“In Theresa May, Stephen Crabb, Michael Gove, Andrea Leadsom and Liam Fox, we have five strong candidates, with vastly different skills and experiences - all of whom could competently take on the role of Conservative Party leader.

But we are not just looking for a party leader, but a Prime Minister in very uncertain times.  Theresa May has the most suitable experience, temperament and skills to take on the awesome responsibility of becoming Prime Minister of the United Kingdom.  She also has a clear and positive vision for the future of our country.

I have consulted widely in my constituency and discussed the candidates with many members of my local Conservative Association over the last few days.  From the conversations I have had, Theresa May is the preferred candidate of both the local electorate and local Conservative members and supporters – including many who had supported Brexit.

As Home Secretary for more than 6 years, Theresa May has shown she has tenacity and staying power.  She is not afraid of taking on difficult tasks or of fighting vested interests.  She exudes competence.  She takes her job seriously.  By her own admission, she does not hang around the tea rooms and bars of the House of Commons gossiping or trying to curry favour.  She gets on with the job in hand and is laser focused on that job until it is done.

When Theresa May visited my constituency in 2014 she held a Q&A session and showed that she was not only a master of her own Home Office brief, but of every other department too.  Everyone who attended the event said how impressive she was.

For a long time Theresa May has advanced an agenda of modernisation and reform within the Conservative Party and the country.  As she said yesterday:  ‘We have shown that when the Conservatives have an open, inclusive, One Nation agenda of social reform, we win elections – and we change the country for the better.’

Theresa May is best positioned to bring the country and the party together after a bruising referendum debate.  As leader I know that Theresa May will continue the social reform programme started by David Cameron and will work towards making the UK an even wealthier and fairer society.

For the unity of my country and my party and for the future of my children I shall therefore be supporting Theresa May in the leadership election.”

There are two stages to the Conservative leadership election:

First, Conservative MPs vote to narrow down the current 5 candidates to just 2 in a series of ballots in Parliament.  The first of these takes place on Tuesday 5th July, then on Thursday 7th July and finally, if necessary, on Tuesday 12th July.

Second, the final 2 candidates will go to a ballot of all current Conservative Party members.

The final result is due to be announced on 9th September.

The accompanying picture is of Nigel Huddleston and Theresa May at the Lygon Arms in Broadway, at a Q&A event in June 2014

UK Parliament Disclaimer: This e-mail is confidential to the intended recipient. If you have received it in error, please notify the sender and delete it from your system. Any unauthorised use, disclosure, or copying is not permitted. This e-mail has been checked for viruses, but no liability is accepted for any damage caused by any virus transmitted by this e-mail. This e-mail address is not secure, is not encrypted and should not be used for sensitive data.