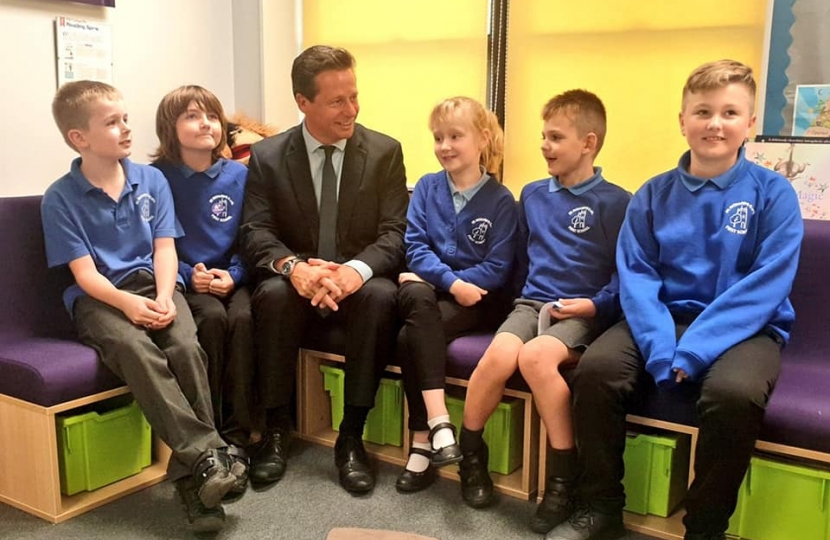 Mid Worcestershire MP Nigel Huddleston has welcomed the Government’s announcement that schools throughout the county will receive millions of pounds in additional funding from next April.

The Government has announced that schools in Worcestershire will receive on average over 4.5% more funding per pupil next year as part of the multi-billion pound investment in primary and secondary education. The average increase across local authorities in England is 4.1% per pupil. However, Mr Huddleston’s constituency of Mid Worcestershire is provisionally set to receive an average of 6.1% under the allocations released by the Government.

Speaking after the announcement, Mr Huddleston said: “In the past Worcestershire has suffered from underfunding compared to other parts of the country. Since becoming an MP I have worked with colleagues, teachers, and parents for fairer levels of funding in our schools and I am glad that additional funds will finally be coming our way.

"The first part of the Prime Minister’s £14 billion investment pledge into our education system is very much welcome, with some schools in my constituency expecting to receive funding increases of more than 10 per cent for 2020/21.”

He added: “This new funding is targeting those schools who need support the most. I am delighted the money will help continue level-up the financial support available for Worcestershire pupils.”

Schools in Mid Worcestershire are expected to receive an additional £2.8 million in funding for 2020/21 as a result of this extra investment, taking the total to £48.6 million. However, the final funding allocations for each school will be decided by Worcestershire County Council. Mr Huddleston said that he hopes the Council will implement the funding allocations in full.

The additional £14 billion investment over the next three years comes in addition to the £1.5 billion to cover teacher pensions costs and the £780 million funding for pupils with Special Educational Needs and Disabilities (SEND) next year.

All of Worcestershire is now in Tier 2 - High Alert Level. To find out what this means, please have a look at the photo, and for more information visit this page.